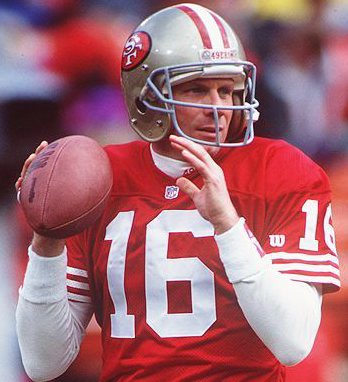 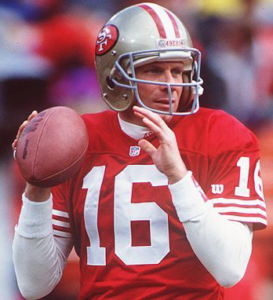 Joseph Clifford Montana Jr. (born June 11, 1956), nicknamed “Joe Cool” and “the Comeback Kid”, is an American former professional football player who was a quarterback in the National Football League (NFL) for 16 seasons, primarily with the San Francisco 49ers. He also played for Kansas City Chiefs. After winning a national championship at Notre Dame, Montana started his NFL career in 1979 with San Francisco, where he played for the next 14 seasons. While a member of the 49ers, Montana started and won four Super Bowls and was the first player ever to have been named Super Bowl Most Valuable Player three times. He also holds Super Bowl career records for most passes without an interception (122 in four games) and the all-time highest passer rating of 127.8. In 1993, Montana was traded to the Kansas City Chiefs for his final two seasons, and he led that franchise to its first AFC Championship Game in January 1994. Montana was elected to the Pro Football Hall of Fame in 2000, his first year of eligibility.

Among his career highlights, “The Catch” (the game-winning touchdown pass vs. Dallas in the 1981 NFC Championship Game) and a Super Bowl-winning 92-yard drive against the Bengals in Super Bowl XXIII are staples of NFL highlight films.

The 49ers retired the number Montana’s #16 jersey after the conclusion of his playing career. In 1994, Montana earned a spot on the NFL 75th Anniversary All-Time Team; he is also a member of the NFL 1980s All-Decade Team. In 1999, editors at The Sporting News ranked Montana third on their list of Football’s 100 Greatest Players. Also in 1999, ESPN named Montana the 25th greatest athlete of the 20th century. In 2006, Sports Illustrated rated him the number-one clutch quarterback of all time.