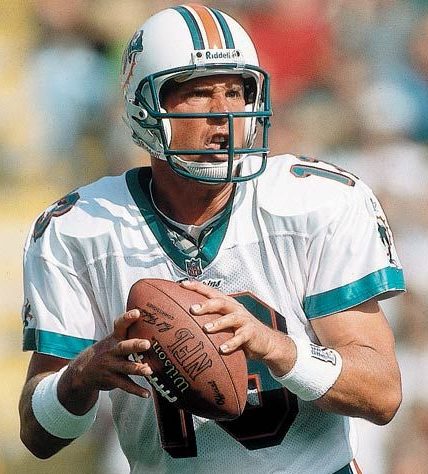 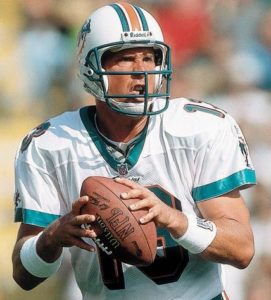 Daniel Constantine Marino Jr. (born September 15, 1961) is an American former professional football player who was a quarterback for 17 seasons with the Miami Dolphins of the National Football League (NFL). After a successful college career at Pittsburgh and being named First-team All-American in 1981, Marino was the last quarterback taken in the first round of the quarterback class of 1983. Marino held or currently holds dozens of NFL records associated with the quarterback position, and despite never being on a Super Bowl-winning team, he is recognized as one of the greatest quarterbacks of all time.
Best remembered for his quick release and powerful arm, Marino helped the Dolphins become consistent postseason contenders, leading them to the playoffs ten times and one Super Bowl appearance in XIX, although a title victory ultimately eluded him during his career. Marino is considered by many to be one of the greatest players to never win a Super Bowl and has the most career victories of quarterbacks to not win a title at 155 (147–93 in regular season and 8–10 in playoffs).
A nine-time Pro Bowl selection, eight-time first or second team All-Pro, and All-AFC six times, Marino was voted NFL Rookie of the Year by Sporting News. The following season in 1984, Marino was the NFL Most Valuable Player (MVP), when he set single season records of 5,084 passing yards, 48 touchdown passes, nine 300-yard passing games, and four 400-yard passing games. He was voted the 1994 NFL Comeback Player of the Year, and the 1998 Walter Payton NFL Man of the Year. At the time of his retirement, Marino held more than 40 NFL single season and career passing records (many of which have since been surpassed), including career passing attempts (8,358), completions (4,967), passing yards (61,361), and touchdown passes (420). Marino was inducted into the College Football Hall of Fame in 2003, inducted into the Pro Football Hall of Fame in 2005 in his first year of eligibility, and is currently one of only three former Miami Dolphins to have his jersey.